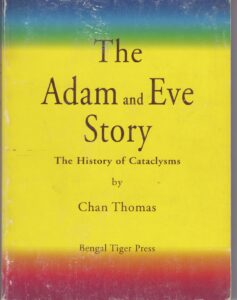 Chan Thomas’ book, first published in 1963, is one of possibly hundreds which reference the topic of cataclysm theory. What sets it apart from most, if not all of its peers, is that the CIA at some point classified a work which was already in the public domain, and then released a sanitized version of it in 2013. The original text has been available since publication.

Thomas seems to have sourced much of his information from having knowledge of Project Nanook (1947), which remained classified from 1947 until 1988, as described in World in Peril (1994). Many of the details in Adam and Eve are almost identical to what is to be found in Ken White’s book. This explains why Thomas seldom provides citations for much of his information – Project Nanook remained classified when Adam and Eve Story was published in 1963 – he would have been prosecuted under the Official Secrets Act had he revealed his source. This is probably the reason why the CIA classified The Adam and Eve Story in the first place.

What follows is the final installment of 4 parts – the closing paragraphs of the original book and the “Aftermath” volume, which was later published separately. I recommend first reading Part 1, Part 2 & Part 3 of this book.

When Indra, King of the Gods, had destroyed the Titan who held the waters of the earth captive in his entrails, he returned to the heights of the Central Mountain with the song of the rains and running waters in his ears. But where his dwelling once stood, he saw only ruins and ashes. So he summoned Visvakarman, god of works and arts, and asked him to build another palace to match his powers.
The architect set to work; soon towers, buildings, and gardens rose among lakes and woods. Indra urged him forward impatiently. Each day he called for some fresh marvel, pavilions more richly adorned, statues greater in number and cunning. A fever seemed to burn in him. And Visvakarman, exhausted by his labors, decided to lay a complaint before the Creator of the world. Brahma received him, gave ear, approved, and went to plead his case before Vishnu, the supreme Being. Help was promised.

Soon a young Brahman appeared at the King’s palace and demanded audience. Charmed by the light of his eyes, Indra granted his request. “Oh King,” said the messenger, “Thy palace shall be the noblest of all.” These words were sweet to Indra’s ears, and he rejoiced.

Vishnu’s messenger continued: “It shall be the noblest of palaces which the Indras before thyself sought to build.” The King became uneasy. “Dost thou say that there were other Indras, Other Visvakarmans before ourselves, other palaces before mine?” “Indeed yes,” the youth answered, “I have seen them.”

“Moreover, I have seen the world arise and vanish, arise and vanish again, like a tortoise’’s shell coming out of Infinite ocean and sinking back. I was present at the dawn and twilight of the Cycles, past counting in their numbers, nor could I count all the Indras and Visvakarmans, even the Vishnus and Brahmas, following one another without end.” – Wrahmavaivarta Purana and Krishnajanma Khanda

“O Solon, Solon, you Hellenes are but children….

There is no old doctrine handed down among you by ancient tradition nor any science which is hoary with age, and I will tell you the reason behind this. There have been and will be again many destructions of mankind arising out of many causes, the greatest having been brought about by earth-fire and inundation. Whatever happened either in your country or ours or in any other country of which we are informed, any action which ts noble and great or in any other way remarkable which has taken place, all that has been inscribed long ago in our temple records, whereas you and other nations did not keep imperishable records. And then, after a period of time, the usual inundation visits like a pestilence and leaves only those of you who are destitute of letters and education. And thus you have to begin all over again as children and know nothing of what happened in ancient times either among us or among yourselves.”

As for those genealogies of yours which you have related to us, they are no better than tales of children; for in the first place, you remember one deluge only, whereas there were a number of them. And in the next place there dwelt in your land, which you do not know, the fairest and noblest race of men that ever lived of which you are but a seed or remnant. And this was not known to you because for many generations the survivors of that destruction made no records.” – Plato: Timaeus (Spoken by a priest of Egypt)

“Therefore will not we fear, though the earth be removed, and though the mountains be carried into the midst of the sea;

Though the waters thereof roar and be troubled, though the mountains shake with the swelling thereof.“ 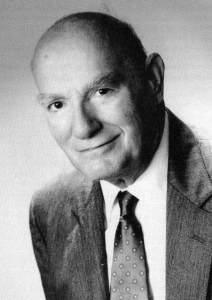 Dr. Thomas attended Dartmouth College and Columbia University, graduating from the latter in Electrical Engineering. As a result of his research and analysis since 1949, Dr. Thomas has become recognized as the world’s leading authority in cataclysmology.

His cross-correlation research in the fields of stratigraphy, vertebrate palaeontology, radiology, oceanography, glaciology, seismology, palaeophilology, earth magnetism, anthropology, and other related fields has demonstrated that the cataclysmological concepts as presented by DeLuc in 1779 and Cuvier in 1812 are definitely more acceptable within international scientific circles than they have been previously.

Dr. Thomas’ definitive efforts in integrating the various earth sciences have distinguished him as the only American with such a specialized scientific forte.

He devoted twenty years in the writing of The Adam and Eve Story, which included seven years in retranslating Genesis I, II, and III. He is the only person to have formalized the science of cataclysmology, achieved through his first crosscorrelating known, accepted data toward proving or disproving whether cataclysms have happened, then deriving the process of cataclysms, followed by the time schedule of cataclysms, and fifteen years of research in finding their trigger.

Dr. Thomas published “Aftermath” as a separate volume comprising an additional 85 pages, which I am including here in its original format (or download the PDF).

The Story & The Event

The Enemy Within
Scroll to top