As might be expected, the text of the Magna Carta of 1215 bears many traces of haste, and is clearly the product of much bargaining and many hands. Most of its clauses deal with specific, and often long-standing, grievances rather than with general principles of law. Some of the grievances are self-explanatory: others can be understood only in the context of the feudal society in which they arose. Of a few clauses, the precise meaning is still a matter of argument. In feudal society, the king’s barons held their lands `in fee’ (feudum) from the king, for an oath to him of loyalty and obedience, and with the obligation to provide him with a fixed number of knights whenever these were required for military service. At first the barons provided the knights by dividing their estates (of which the largest and most important were known as `honours’) into smaller parcels described as `knights’ fees’, which they distributed to tenants able to serve as knights. But by the time of King John it had become more convenient and usual for the obligation for service to be commuted for a cash payment known as `scutage’, and for the revenue so obtained to be used to maintain paid armies.

Besides military service, feudal custom allowed the king to make certain other exactions from his barons. In times of emergency, and on such special occasions as the marriage of his eldest daughter, he could demand from them a financial levy known as an `aid’ (auxilium). When a baron died, he could demand a succession duty or `relief’ (relevium) from the baron’s heir. If there was no heir, or if the succession was disputed, the baron’s lands could be forfeited or `escheated’ to the Crown. If the heir was under age, the king could assume the guardianship of his estates, and enjoy all the profits from them-ven to the extent of despoliation-until the heir came of age. The king had the right, if he chose, to sell such a guardianship to the highest bidder, and to sell the heir himself in marriage for such price as the value of his estates would command. The widows and daughters of barons might also be sold in marriage. With their own tenants, the barons could deal similarly.

The scope for extortion and abuse in this system, if it were not benevolently applied, was obviously great and had been the subject of complaint long before King John came to the throne. Abuses were, moreover, aggravated by the difficulty of obtaining redress for them, and in Magna Carta the provision of the means for obtaining a fair hearing of complaints, not only against the king and his agents but against lesser feudal lords, achieves corresponding importance.

About two-thirds of the clauses of the Magna Carta of 1215 are concerned with matters such as these, and with the misuse of their powers by royal officials. As regards other topics, the firstclause, conceding the freedom of the Church, and in particular confirming its right to elect its own dignitaries without royal interference, reflects John’s dispute with the Pope over Stephen Langton’s election as archbishop of Canterbury: it does not appear in the Articles of the Barons, and its somewhat stilted phrasing seems in part to be attempting to justify its inclusion, none the less, in the charter itself. The clauses that deal with the royal forests (§§ 44, 47, 48), over which the king had special powers and jurisdiction, reflect the disquiet and anxieties that had arisen on account of a longstanding royal tendency to extend the forest boundaries, to the detriment of the holders of the lands affected. Those that deal with debts (§§ 9-1l) reflect administrative problems created by the chronic scarcity of ready cash among the upper and middle classes, and their need to resort to money-lenders when this was required. The clause promising the removal of fish-weirs (§ 33) was intended to facilitate the navigation of rivers. A number of clauses deal with the special circumstances that surrounded the making of the charter, and are such as might be found in any treaty of peace. Others, such as those relating to the city of London (§ 13) and to merchants (§ 41), clearly represent concessions to special interests.

(Clauses marked (+) and in italics are still valid under the charter of 1225, but with a few minor amendments.

Clauses marked (*) were omitted in all later reissues of the charter. In the charter itself the clauses are not numbered, and the text reads continuously. The translation sets out to convey the sense rather than the precise wording of the original Latin.)

JOHN, by the grace of God King of England, Lord of Ireland, Duke of Normandy and Aquitaine, and Count of Anjou, to his archbishops, bishops, abbots, earls, barons, justices, foresters, sheriffs, stewards, servants, and to all his officials and loyal subjects, Greeting. KNOW THAT BEFORE GOD, for the health of our soul and those of our ancestors and heirs, to the honour of God, the exaltation of the holy Church, and the better ordering of our kingdom, at the advice of our reverend fathers Stephen, archbishop of Canterbury, primate of all England, and cardinal of the holy Roman Church, Henry archbishop of Dublin, William bishop of London, Peter bishop of Winchester, Jocelin bishop of Bath and Glastonbury, Hugh bishop of Lincoln, Walter Bishop of Worcester, William bishop of Coventry, Benedict bishop of Rochester, Master Pandulf subdeacon and member of the papal household, Brother Aymeric master of the knighthood of the Temple in England, William Marshal earl of Pembroke, William earl of Salisbury, William earl of Warren, William earl of Arundel, Alan de Galloway constable of Scotland, Warin Fitz Gerald, Peter Fitz Herbert, Hubert de Burgh seneschal of Poitou, Hugh de Neville, Matthew Fitz Herbert, Thomas Basset, Alan Basset, Philip Daubeny, Robert de Roppeley, John Marshal, John Fitz Hugh, and other loyal subjects: 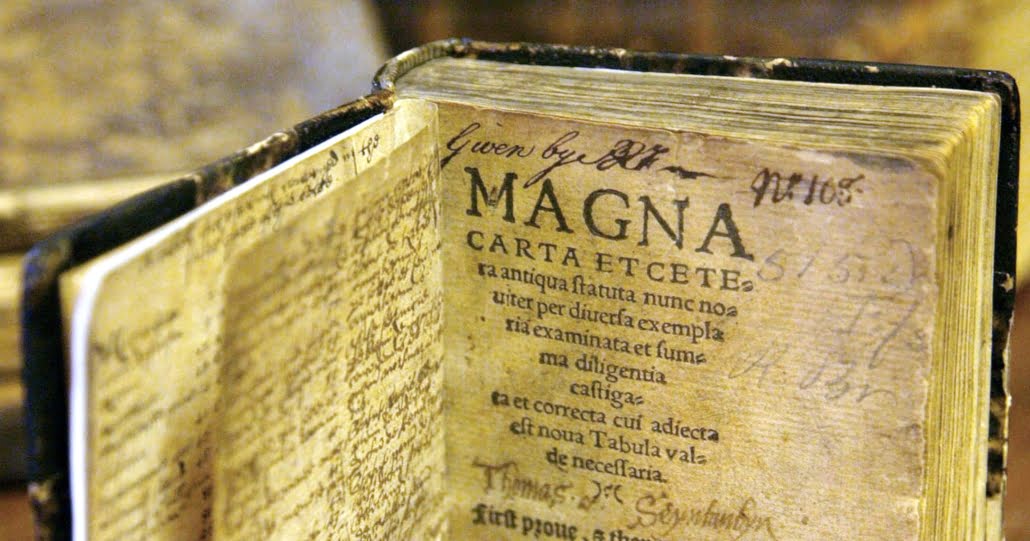